Its been quite a busy weekend. Mark is currently in the air, on flight NZ1 to Auckland, he’s almost here!!!!

This weekend, I bought a car!! How exciting, I am not driving the school van!! I do still feel like I am on a strange pseudo holiday though, the car doesn’t feel like mine at all! I bought it from a Toyota dealer, a parallel import from Toyota Japan. It was registered and given a NZ number plate the day I collected it, and I am its first New Zealand owner!! Despite being 8 years old, it has uber low mileage and seriously feels and looks like a new car. Got to say though, it must be unique to the South Pacific because I have never heard of the Toyota 1st, have you?

I went to the cinema too, with a friend. This time there was two of us, and we decided to watch Hangover 3. Well worth watching, still funny! I left it wondering if there was going to be another one, because of the way they left it, but I saw an interview on TV today that tells me that’s it. Best really, while they still are funny!

It has been a gloriously sunny Saturday, and Monday, with a rainy stormy Sunday sandwiched in between. Late night last minute calls to Mark in the UK, as he makes his last minute preparations means that I was woken by a text from the cycling club, coffe at 10am. Since it is round the corner, I thought it was rude not to! It turned out to be coffee at 10, track at 11, coffee at 12, and another one at 12:30! I had ‘THE BIKE’ the only one with a bigger gear. Not as big as the changed over gear, but I worked hard and with focus. I decided I would really make a huge effort. I managed to stay with the bunch for ten minute stretches, and in between I rode around the top, and let them come back while I rested. I had a sit down get off rest half way through the session, where Bruce reminded me that I wasnt able to stay with them at all a few weeks ago. I was actually feeling more positive, despite being knackered! I realised that I had been in the group for decent stretches of time, and that is a huge improvement on a solo ride and being lapped a lot! Its so cool to be able to ride in a velodrome so much. The heaters were on today, not for us though, the NZ elite male track cyclists followed us at 12!

The jeans gave up the ghost today, which is a mini crisis: the only pair I have, and I struggle to get jeans long enough with wide enough thighs. All this track cycling is not going to help!! So, I have adopted the local clothing trend instead: leggings / thick tights and tunics!

Our ship set sail a few days ago too, and I can track our container’s progress with GPS tracking! Really cool!! I should all being well, see it again around the end of July.

Monday, bank holiday, I decided to maximise the sunshine and go for a  bike ride. It took me via Oreti beach, really cool to be able to ride to such beautiful places that are all so close. 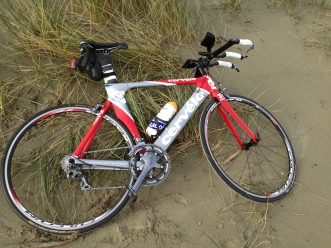 I think I need to wait and get my mountain bike though, I had to get off when I reached the sand, a TT bike doesn’t do well on that sort of surface!