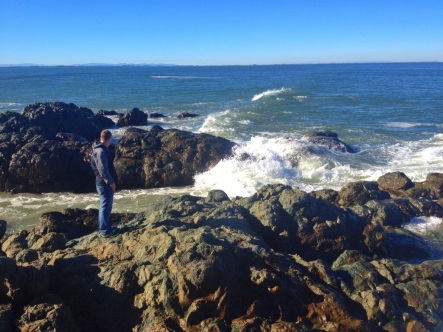 It’s been a rough few weeks in the Ryding household. We were both ill over the Easter weekend with food poisoning, no easter eggs for us. Then only 4 days later, I contracted a stomach / bowel virus of some kind that at first masqueraded itself as gall stones. Long story short, several days in bed, two trips to A&E, two emergency blood tests, one ECG and an emergency ultrasound scan later, it has been discovered that it is in fact not gall stones as was first feared. Thank goodness for that.

The picture above is Riverton rocks, where Mark took me today, the first day in several that I have been able to get up out of bed safely. He knew that a seat by the sea would solve all, and make me feel better, and he was right. Have a look at my little video and poem that I wrote while I was sat there. 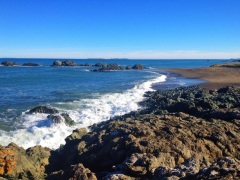 We learned a few things about the Health system here in the process. ACC (an intermediary company funded through contributions taken directly from wages) funds all accident related illnesses but not sickness. So, unless you want to be stuck on a huge waiting list, I advise you get private health cover. It is something we will be looking into as a direct result of this experience. We paid for the scan to take place, 24 hours after my first visit to A&E. it cost us $185, well spent, because very rapidly we discounted their initial diagnosis of gall stones, one that I might still be fearing was true for weeks on end, had we not paid.

Anyway, before all this misery, we went on a great day out to the last stock car meet at Riverton Speedway with some good ex pat friends of ours. 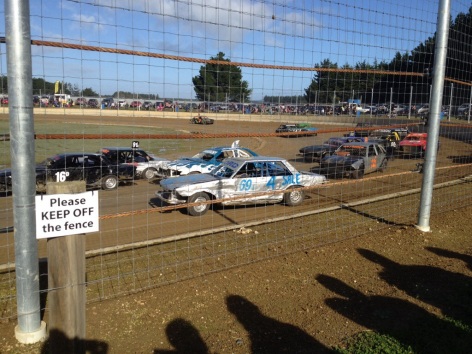 Great fun, great day out, and smashing great entertainment, literally! Specially the 53 car smash-fest derby to end the meet, last car standing was the winner, someone called Matt, that coincidentally, Mark used to work with!! It continues to be a small world.