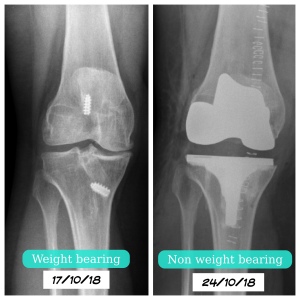 It’s fair to say that this last month has been the most challenging of my life. That might sound dramatic, but I am being sincere. The pain associated with a knee replacement is off the chart and cannot truly be described or fully appreciated unless you have been through the operation yourself. Add to this an intolerance to all opiate pain meds, and you can only begin to appreciate the challenges that I have faced.

Listen to this blog as a podcast:

I have kept a video diary daily since day 6, the first day that I really felt anywhere near remotely up to being on camera. The link for these, if you want to follow / continue to follow my journey is below.

Horrendous pain. Pain that would frequently make me scream and cry. I also had massive and very painful bruising, specially on the back of my leg due to the fact that this is where the lymph nodes are and the lymph system is responsible for transportation of fluids around the body. During this week i was in extreme pain, all of the time. Sleep was impossible, getting comfortable was impossible and I was struggling to eat anything much at all.

I was also experiencing terrible narcotics withdrawal symptoms. I actually googled it because some of the symptoms were horrendous and I wanted to make sure nothing was terribly wrong. Medical documents that I found likened the Oxycodone withdrawal to that of heroin. Shit! I was only on the drug for 3 days before I began refusing to take it! (It was making me violently violently sick and rendering me bed bound and unable to do any physiotherapy at all.)

Moving my leg on its own was totally impossible. I had to lift it with my hands like it was paralysed or something. Even so, any movement caused excruciating pain. I was totally unable to get into the front of a car and thus was forced to get into the back seat and sit sideways. This was still a major operation because someone had to take the weight of my leg as I shuffled myself in backwards as I was unable to hold it up myself and allowing it to bend also causes excruciating pain.

I seriously struggled with the exercises the physio gave me, it as painful, frustrating, I felt like a failure and regularly shed tears of frustration. Two crutches to walk, and at this stage, this was very slow and laboured. I was not able to take my weight on that leg and stand on two feet unaided until almost the end of the second week. Even so, taking a step unaided would still be impossible at this stage. 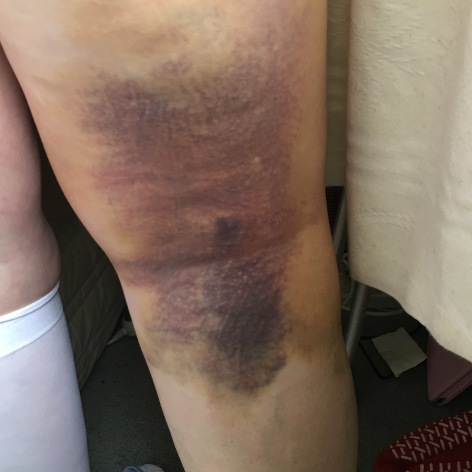 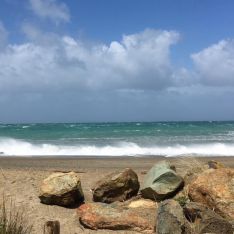 inside the car picnic 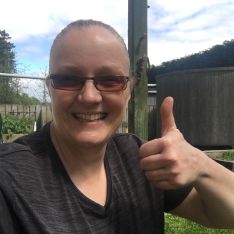 mini trip to the garden 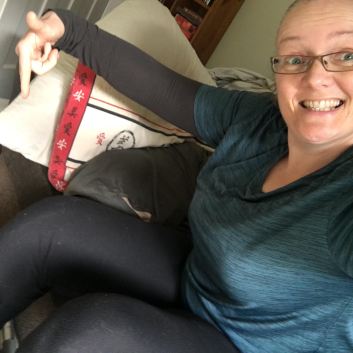 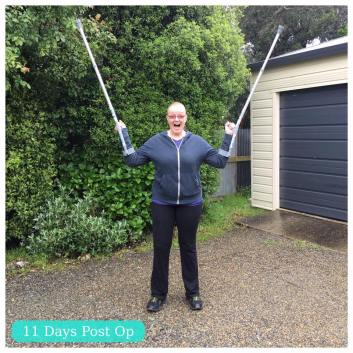 Lots of things happened in this period. At the start of week 3, I had the 41 staples removed. This was like 41 little needle pin pricks, not massively painful, but rather unpleasant nonetheless. I was now able tasess how much more sensation I had lost due to nerve damage (I was warned of this pre-op). I pretty much cannot feel anything the whole length of my scar on the lateral side, which is a patch that has extended from the small patch on the right of my knee that I lost sensation in post op ACL in the 1990’s. I have experienced it before, I was expecting it but it is still weird to get used to a whole new section of your leg that you can no longer feel. It made me pretty paranoid about giving myself ice burns with the constant icing of the knee that I am required to do.

Although I managed to progress (tentatively) to 1 crutch in week 3, I was still unable to walk very far so need to borrow wheelchairs when we go out anywhere that requires walking (like local markets, the supermarket). Not amusing, quite frustrating and I learned a heap looking at the world from the down low.

It took two weeks for me to be confident enough to have a shower without assistance (and almost that long to be able to get the knee bent comfortably to get my whole self into the shower cubicle and sat on the shower stool! It’s not much fun at all being temporarily disabled.

Week 4 – I was finally able to get in the front seat of a car, but it was still a bit uncomfortable for journeys longer than about 20 mins or so. Still, much better than back seat twisted sideways travelling which was making me feel quite queasy.

Then there’s the exercises. My quad still doesn’t want to play ball, which I find mildly concerning so I now have weight bearing exercises that include wall squats and assisted ham string curls as well as balancing on one leg. The first time I tried the balance one I was totally terrified that the leg would not hold me up! It has taken this long to be able to confidently stand on it on its own and weight bear – and also taken this long to be able to (with concentration) walk a short distance without crutches. I am not that good at it yet  though to be able to go outside without them.

It is a slow, painful and frustrating journey, and I have not even mentioned the fact that I cannot even get close to a full rotation on an exercise bike, even if I put the seat up as high as I can. This single little thing is what is still making me feel really stressed. Each time the sun is shining that would usually mean I went out for a bike ride. Currently I cannot.

Nope, I am not a very patient patient. 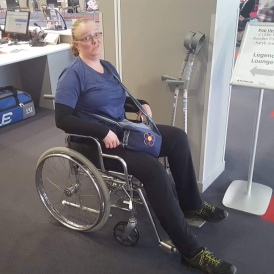 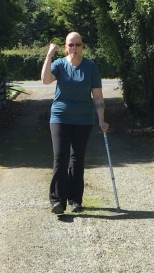 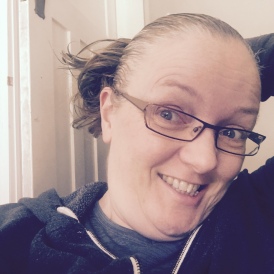 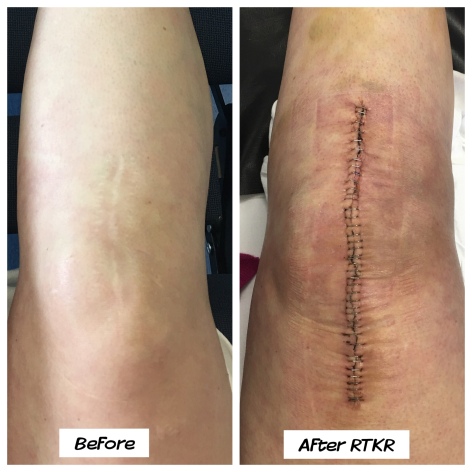 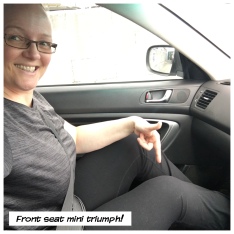 1st time front of a car 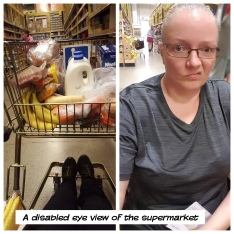 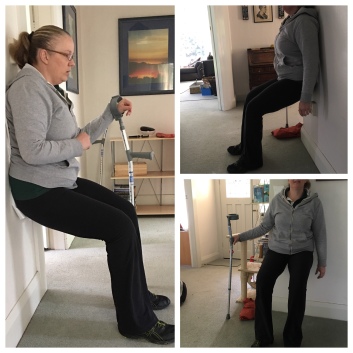 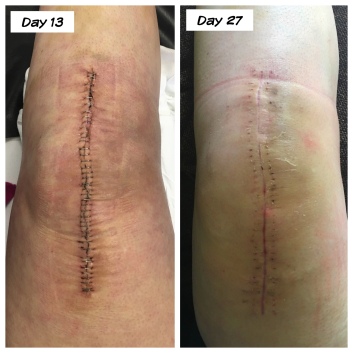 This is currently coming up to 5 weeks. It has only been in the last few days that I actually feel myself again, even though I still don’t have a lot of stamina for walking far and that sort of thing, but I have finally stopped feeling nauseous and my appetite is almost back to normal. still working like a mad thing on flexion exercises, lately the incessant pain has abated and I now have periods where I have no pain at all (yay, at last!!). I have got the flexion up to 88 degrees, I need the magic 90 to be allowed to drive. I have worked hard this week on almost nothing but exercises so I am hoping I see some results at my next visit to the physio for my weekly assessment on Monday. 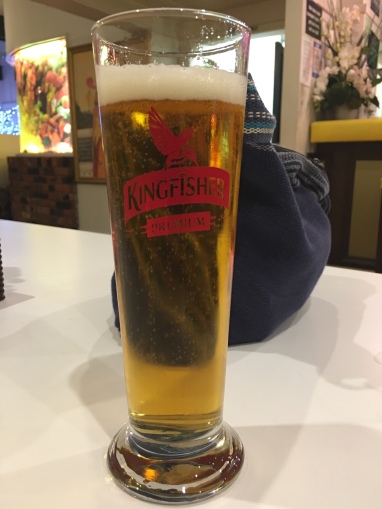 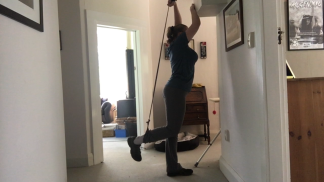 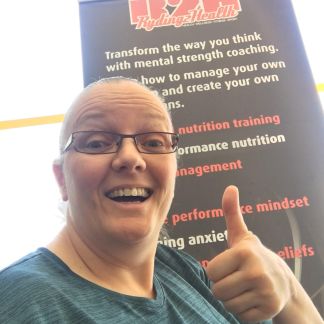