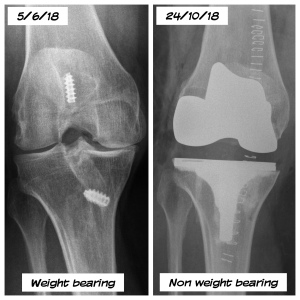 We’re coming up to the six month mark with this bionic knee and some really interesting things are starting to happen. According to the info I was told about a knee replacement, I am now smashing and defying what is meant to be possible so I have established some big goals for me and this knee!

The knee so far

I have been looking through the X-Rays that I have had on the knee, and the one above was taken a few months before the op, used in conjunction with an MRI to make me a custom designed knee joint implant.

The previous  X-Ray  was  taken  in  Feb  2018 and I cannot believe how much difference there is. On the June X-Ray the bones are now touching, they were not before. Throughout the entire journey leading up to the op, EVERYONE was arguing with me as to whether I actually needed this knee replacement at all. Here is the side by side comparison of those two X-Rays.

Having heard directly from other people with a TKR who have achieved more than that, I was quite simply NOT satisfied with this information. I do not see why this right leg cannot be functionally the same as the left, even if it will never be the same again biomechanically.

So, that has prompted me to set myself a new goal. A LARGE ONE.

So, now that is out in the open, I decided I would also share my plans on how I intend to get there.

Fitness plans from here on

Before I even decided to make this public, I have, for a while now, been calculating whether it is actually possible. I never set myself impossible goals: everything is always carefully calculated. Sometimes too much so!

First I needed to find out where I was currently at. I had not swum regularly in years because the kick used to hurt my knee every which way I tried it. After a few weeks of being back in the pool, I tried a 3km swim, (the race distance) simply as a benchmark. I got it bang on 60 mins. Since then I have managed to shave another couple of minutes off as well.

So I decided (because I had completed it relatively easily) to crack one of these out every week. I have, since then, been swimming 3km every week since, plus 2km the following morning. Last week work conspired against me and they ended up the other way around! I usually do this on a Wednesday and Thursday morning.

I will do this for a few months, to build the base training up, then add in longer interval pace sets.

This will take longer to achieve. The race distance is 120km. I have to be able to ride at around 27kmph average for the whole 4 hours. I have never really trained for this distance as I was always a sprinter (20km flat out!). This will be a lot more tactical and involve a lot more training.

Building the distance is the first aim. In periodised training this is called base training. I am currently up to around 40km and the goal is to continue to build this up at a steady pace till I get to around 4 – 4.5 hour rides. I am aiming to get one of these in a week at this stage. Simply because of the way my working week is structured, sometimes a long ride is not possible. So on those occasions I am riding two shorter rides at a higher intensity (a ‘pace ride’). I have managed to hit my target pace for a 40 min ride at this stage.

From here this will evolve and grow and I expect most of my training hours to have to go into this element of the race. At the moment I lack power (due to muscle loss and deconditioning), so wind and hills floor me almost at present! So that is another element I will need to add in and I might actually have to join a gym at some stage to be able to have access to heavy weights for this element of the training.

For now, my first goal is to retrain my centre of balance and evenly load both legs because I have been favouring the left for a lot of years, so my squats (to name but one) are off balance at the moment.

Here is the program that my new physiotherapist has currently got me working on. Since this was recorded I have managed to progress the knee ups to step downs and am also now adding single leg balance off the floor as well.

I am returning to regular blogging now on my lead up to this race (now that I have something to write about haha!) so please do hit follow if you don’t already, so you get all the updates on the way to the 15 February 2020….