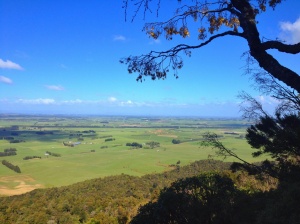 It’s been a short but busy week at work, after the labour weekend and Monday off. So what better way to end the working week than with a tramp at Forest hill, up to this vantage point?

This weekend we both had a race, I was rowing in my own rowing club’s sprint regatta, and Mark decided to do the Bluff Grunt. Well, what better way to spend a Sunday than running up an extinct volcano and down the other side?! 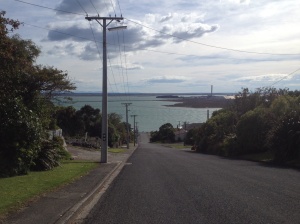 You know you’re in for a tough race when this hill is considered a short early race warm up!

Saturday morning was my regatta. Nice and local, we were the hosts. I did three races, a women’s doubles, a mixed quad and a mixed four.

For the purposes of this video there’s some terms you need to know. A quad is a boat with four people, each has two oars (called sculls). A Four is a boat with four people in, but this time each one has one oar. An oar is much longer, and the boat rigging needs to be changed for these to fit. The three races are hard award work over a short distance, as I explained here.

This was a sprint race, which in rowing terms is just 800m. Quite a contrast from last week’s ultra!

On Sunday, Mark ran the bluff grunt. This is a 12km off road race that starts by the water on the high street, and goes up and over a Bluff Hill, down the other side and past Stirling Point to finish back in a similar spot. A tough race by any stretch of the imagination! He did take the GoPro but here is my spectators footage!

The weather was quite different by the afternoon, when the SBS Bank Tour of Southland started with the Time Trial prologue at Queens Park. 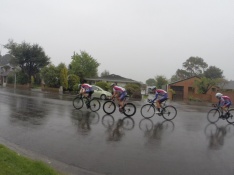 The rain was pretty heavy by then, so we didn’t stay too long. Sadly, due to work, it’s about all of the tour I will get a chance to see this year. 😦