Small things please an ex pat sometimes. I discovered that BBC Strictly has started again, so I am sorted for indoor entertainment for the next three months! The problem is, will I be indoors long enough to watch it all!?!

My journeys to and fro to Dunedin with work continue, so I still pass by the wee cafe with its indoor outdoor loo, and this week I had an added bonus: I found cans of Tetleys! Wohoo! 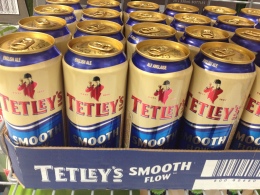 Also took a trip to Queens park after work on Wednesday, love the place, and it always gives me a smile and a great photo. 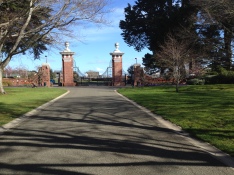 The poor bedraggled chicken we have is going good, new feathers growing, but sadly we lost one of our other two this week, no idea why. Might have to go back to the battery farm next weekend and rescue a few more.

We decided To go camping to Piano Flat this weekend, an opportunity for more tramping, and we planned the tough hike to Titans Rocks, a good training run for the Hump Ridge Track in November.

On the way through Lumsden, we tried a Cafe 6 this time, for a change. Wow, what a stunning surprise that was! The bar was a Chevy, the counter on the left (the post office!) was a surf board and the brick wall wallpaper even incorporated a Banksy! Amazing little place! We stopped in again on the way home on Saturday evening, for dinner! It tripled up as the Post office, a cafe, and a bar/ public house / restaurant – using the building that once was the main bank: hence huge kitchen door vault! 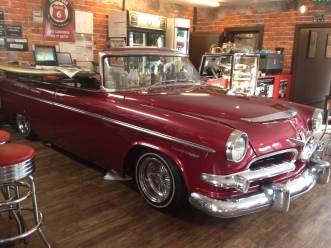 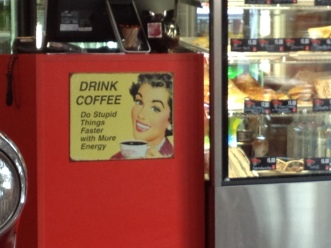 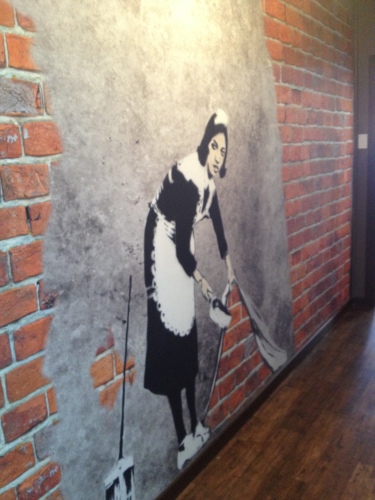 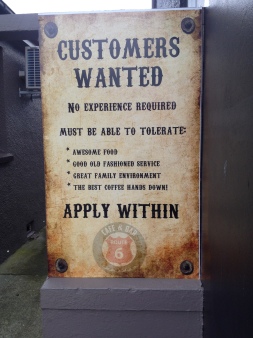 Piano flat was, like Movora Lakes, a simple wee camp site with BBQ sites, and long drop loos. The rest was up to you, the river for water and the trees for firewood (deadwood only). 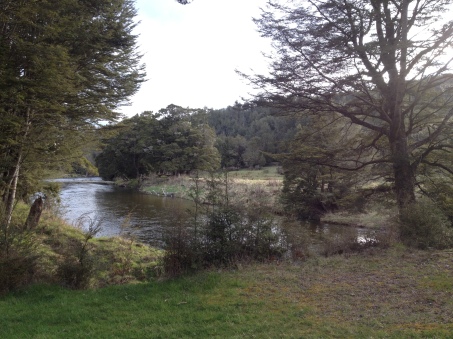 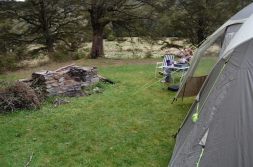 Piano Flat actually has some houses, I assume many are holiday lets or cribs, but one what least was inhabited. We chose a pitch by the river with a nice stone fire base. It was nearby to a house with this comical mail box, the guy rolled up on his quad bike to say hello, and ask had we forgotten anything (because campers usually do apparently!) he said the mail box sculpture, which says airmail on the side, was inspired by some girls camping. He said he strolled out of the bush covered in blood, with a dead deer over his shoulders, fresh kill, when past came two girls with their hands in the air complaining they didn’t have a cell signal! Away he rolled again, bidding us good day.

After setting up camp and starting the fire, the rain started. This wasn’t going to deter us, so we. Used Mark’s handy station wagon, backed it up to the fire and opened the hatch which served as a rain shield. Perfect! 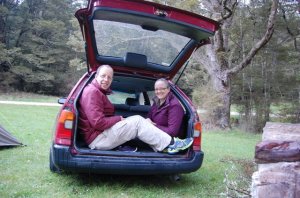 Some new boil in the bag dinners from the local adventure store for dinner (which meant we could use the same water to make coffee) and we settled in front of the fire in sweet peaceful countryside silence. The rain cleared and even a few stars came out.

The next morning we set off early intending to hike the long 7 hour route up to Titans Rocks. I disregarded the hiker walking up a steep hill sign (by contrast to the flat walker on the other trail signs) and never thought anything of it. All I will say is, on reflection, it was an excellent visualisation! 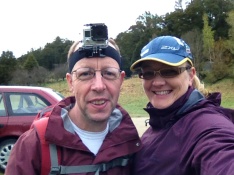 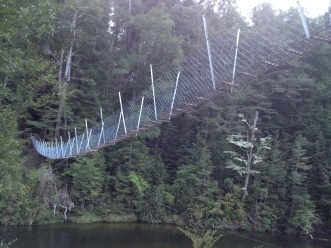 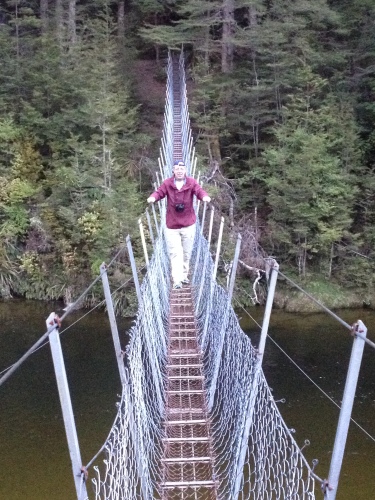 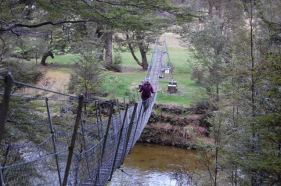 After a short traverse over the river on the swing bridge (which actually should be called swinging bridge!) we were walking alongside the river for about 40 minutes. The path wove up and down, teetered extremely close to the edge at times, and was actually washed away in parts, but on the whole, it was ok and we arrived at the sign and the junction in good time.

I knew after this right turn, that it would go up, up, and up some more, and that’s what happened! It was extremely steep in places, very boggy in many places, and all the low level foliage was growing well in spring, covering the path in many parts, making for very wet trousers from the recent rains. It took us a while of constant up and lots of bush, before the terrain changed. We crossed some rivers, traversing up and down some river valleys. At times it was like an orienteering challenge, as the route signs were a bit sparse and the path was very overgrown and unkempt. It was a particular challenge at the second river crossing where some pretty huge trees had come down, blocking the path. We found the way in the end, and overtook the young lad with wee pumps and a big pack, who had come yomping past us just a few minutes earlier (heading the wrong way at the tree blockage!) 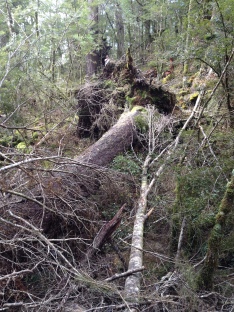 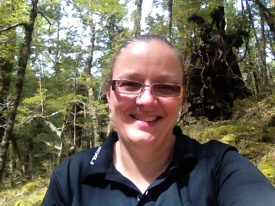 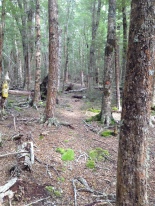 We arrived at a few small clearings, before heading into the bush again. We could see we were. Nearing the top of the tree line. It was very tough going and the further we went, the more overgrown the path was. We came out onto a clearing where we saw a sign- Titans Rocks 2 hours this way. OMG! I was hoping I was closer. Than that! The young lad caught up with us again here, but stopped to wait for his mate. After some searching, we. Found where the path went into the bush again (well, Mark did, all I found was some bones- scary!) 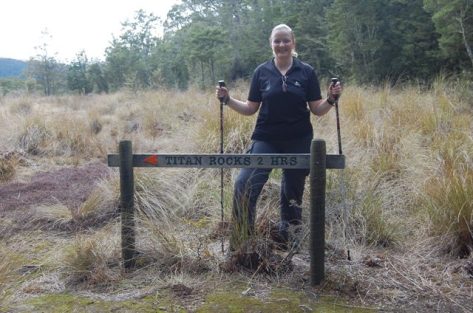 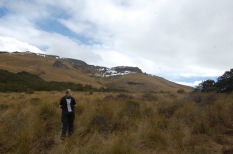 On more clearing then we were at the last stretch. We were close to the top of the trees and the going was now really tough, it wasn’t fun any more, I was kinda over it and just wanted to arrive and sit down!

A little more persistence and orienteering to find the route signs, and we finally emerged from the last group of trees. We were now Just below the snow line, the rocks just ahead.

Turn around, and wow, just wow. An utterly incredible view. I felt like I was on top of the world. We couldn’t even see the bottom of the valley from here it was so high. 1250m to be exact, enough to make your ears pop!

I have to say I was so so impressed. It was tough, man it was tough, but the views were so definitely worth it. I can now see why people stopped to camp in that last clearing where we met the guy again (and the horrid sign!). We couldn’t hand around too much, with a 3:5hr tramp back down again to do before dark, but there was so much tramping to be had, just on the op of that ridge there. Not for the feint hearted though! I will leave that to the youngsters!

The return journey was so so tough. That much walking downhill doesn’t half take its toll on the joints, as well as testing the pressure points in your boots! The sound of water was my motivator, telling me how much progress I had made. Sadly though,RIP to one of my walking poles not far from reaching the river (thankfully). I lost my footing on a really steep slope and ended up sitting on the pole, which is never good! So makeshift Mark fashioned me another from a branch! 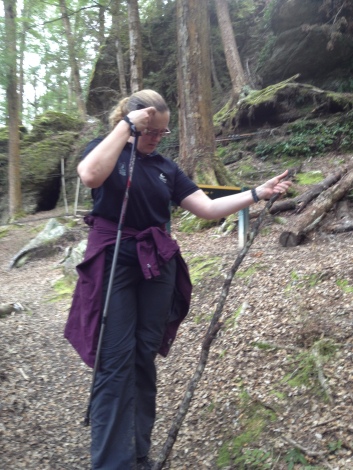 We returned back to the swing bridge around 8 hours after we left. Brilliantly amazing journey. Highly recommend it! Perhaps I’ll do the shorter one(s) next visit!

Here is the route we took: I condensed the GoPro footage into 6 minutes 🙂

Tired.com didn’t even describe it, so it was essential to stop on the way home for food. Thankfully we had already packed up everything (except the tent which we left standing for coffee and change of clothes purposes!)

We were leaving just as the camp site was filling for the weekend. A great bonus to having Friday off!

Of course, we stopped again at Route 6 – where we had a well earned beer and a large dinner (followed by espresso coffee icecream to keep us awake till we got home!)