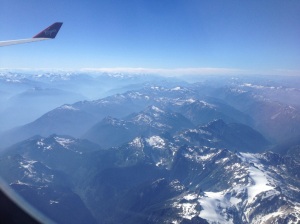 When I booked my flights from NZ to England return, I couldn’t get an air NZ flight from England to USA on the way back, I was forced to take a flight to Vancouver with Virgin Airlines.

Even though this was a 10 hour flight, in keeping with the same length of flights on air NZ via LAX, this was a much smaller plane. That meant much less space. I was also not able to pre book the seats on my flight. I called to query this a few days before my flight, in the hope that they could accommodate an isle seat due to my knee problem. The call centre said I should have on line checked in to my flight and this option was open 60 days prior to my departure date. This information had not been shared with me at any stage, until I called the help centre.

Virgin have some small extras not seen on other planes, e.g. Free luggage scales, and a re packing area, free newspapers and magazines to pick up in the boarding waiting room, wifi on the plane (if you wanted to pay £14.99 for 30mb) but in my opinion, they seriously scrimp on some vital services that I would expect on flights this long.

The seats were a lot narrower, and there was a lot less leg room to the seat in front. There was no in flight menu / timetable available, and no plug sockets (which there are in Emirates and Air NZ flights) only USB so no way of charging an iPad / laptop if you were carrying one. When I asked what the schedule was for the flight I was told I would get a meal, and a mid flight snack. One less meal than I am used to getting during a flight this long.

Despite being sat closest to the kitchen, I was served last, and by the time they reached me, I was simply given a tray, not a choice, as they had ‘run out some time ago’. I was not told what the meal was. It was a small meal, some kind of meat and rice, with a salad. No desert. I asked did they always serve the cabin in the same order, would someone sitting closest to the kitchen always simply be given the ‘left overs’. I was told yes, that would always be the case.

I was asleep when they served the mid flight snack. I didn’t realise this till they came round later to collect rubbish. I asked had I missed something. The cabin crew member said yes, they had served a hot snack. I had to ask her if I could get one, it was not automatically offered. Once again she said she would look and see what was left over. This time it was a mini calzone pizza in a wrapper, on its own.

The toilet was tiny, only just small enough to sit down with your knees touching the door. There were no disposable seat covers and no hand cream like on air NZ flights. You could call the flight crew from your seat, but there wasn’t the option to ask for eye masks, toothpaste, small snacks at other times, like there usually is on other flights I have been on.

Then, to top it off, they failed to check my bags through to all my four flights meaning I have no idea where I need to collect it.

Would I fly Virgin again? Not if I had a choice, no.