I didn’t go to the oyster festival last year because I was still here alone. So, now Mark is here we decided to go. Well it’s so famous we have to do it at least once. Tens of Thousands of people come from all over New Zealand, we kind of felt bad not going!

But- with storms, gale force winds up to 60mph and snow forecast, we really should have expected the unexpected. A group of us went down to Bluff, a 40 min drive. We joined the queues to get into the car park – 1pm, it was windy but all seemed normal. As we were going in, the entrance marquee which was bolted down, was coming loose, the winds were picking up. Everyone was sheltering inside the beer tent it seemed, but the band was still playing, well for 5 minutes at least. 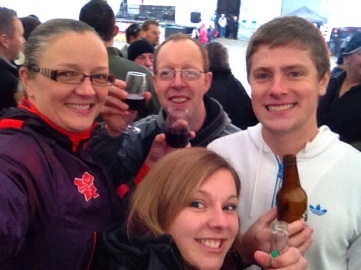 By the time we fought through the crowds to the bar – situated at the opposite end of the long beer tent, a melee was forming. One of the major roof supports on the ‘gable end’ of the tent behind the bar had come loose. Panic was brewing. People began to run and soon the tent was being evacuated for fear it would come down due to the high winds. Most small stalls had abandoned by now So the other large ‘food tent’ was the only shelter. We ran to there. It was braced against a a building on one side only. The other side very quickly became unstable. The canvas began coming loose and breaking free. The winds were very strong, people were struggling to stay standing up, outside. Another evacuation: this tent was also under threat of collapse. We were told the festival had been abandoned.

We were only there 20 minutes tops!

But that wasn’t all. Out on the highway: the only road in and out- total gridlock. We were stranded. For over two hours. Two power poles had come down onto the highway, and we had to wait for them to be repaired. Mixed stories- some blamed wind some blamed human error. 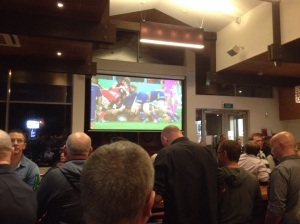 All in all – Saturday ‘fail’! So, we went to the Northern and watched the rugby! Fabulous atmosphere!

The Otago Highlanders played the Cantebury Crusaders, the highlanders being the ‘local’ team. The place was packed, multiple screens showed the game all throughout the bar.

Everyone was watching, cheering, booing, right down to the final TMO decision that disallowed the final try, resulting in a 32-30 loss for the Highlanders.

Then we stepped outside. Wow!

For a sea level city, this is NOT a normal scene. Blanketed in snow in the CBD, a good inch or so.

But as the courtesy cab drove us home, (2.5km!) absolutely NONE at our house. Mad!

That wasn’t the end of our disastrous weather driven weekend. On Sunday morning, we had a guys and a gals team entered for the local ‘Muddy Buddy‘ cross country obstacle course style running race. It was cancelled due to adverse weather conditions! Aaaargh!!!

Still, we decided to go shopping for coal and a whistling kettle and can now report that our old coal range is now working, and our hot water is now HOT HOT HOT!

Let’s hope this storm passes without many more incidents!