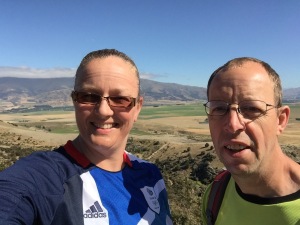 To be truthful, I haven’t really stayed for long in Cromwell, so we didn’t really know what there was to do in this small central Otago town. We were weather chasing, so chose this weekend due to the forecast being good. Setting off really early on Saturday so we got there in good time, the Top Ten camp site was chocka. Seems everyone comes here for Christmas or new year!

We had done some googling and found a walk in Bannockburn sluicings, decided to start there. Central Otago was developed early in the 1900’s and before by the Gold Rush. Sluicing was a surface way to extract gold from loose rock that was stuck in clay. By firing water at the Rock, and down through the ground, the clay was loosened releasing the rock fragments to be sorted through, leaving huge rock piles behind of discarded material. I had no idea this was how it was done, but now I do, I have spotted so many more old gold mining sites that you wouldn’t know existed if you didn’t know that was what they did.

Stewart town was the remnants left behind, up on the plain. It’s hard to imagine a thriving community in such harsh conditions, not many ruins remain because most houses were tin, easy to dismantle and more to the next mine after work dried up. 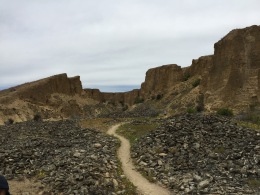 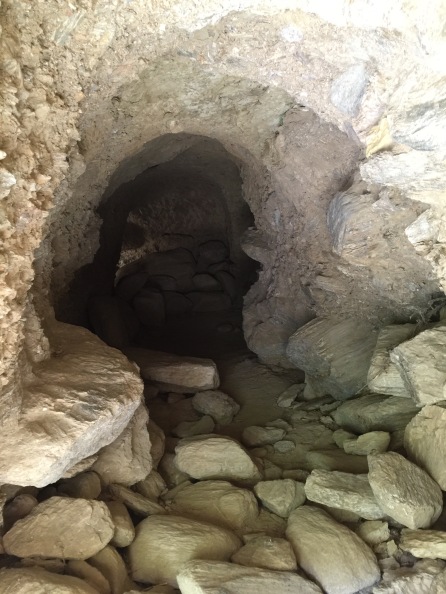 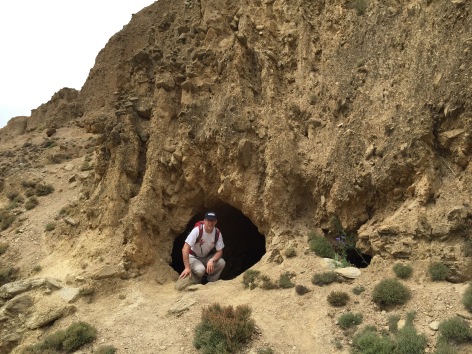 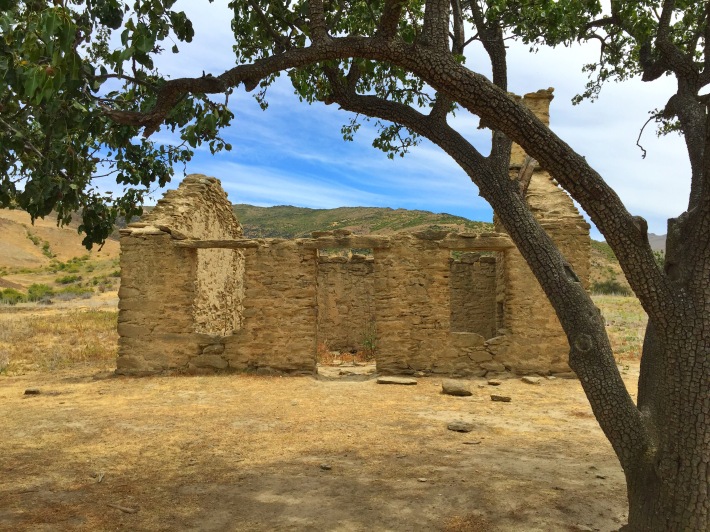 Incredibly interesting to learn about it, very desolate landscape now, desert like, but cracking views. It must have been a harsh life.

sunday morning saw wind and cloudy conditions. Rare for wine country! So we decided to drive around and scout the area for more walks while decking whether to stay. We stumbled upon the farmers market which apparently also doubled up as the cherry festival, complete with cherry spitting contest! 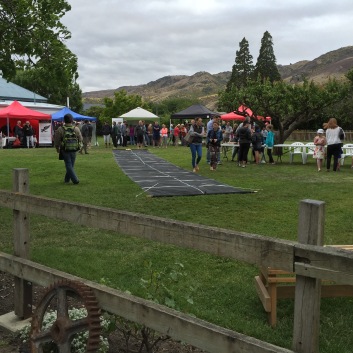 Using our downloaded maps we spent a good hour trying to find the Pisa mountain range tramping routes. After 45 mins of driving up into odd valleys and mountain tops full of remote shack like housing, (another harsh way to live it looked like) we gave up, later finding out the farmers have closed all access.

The DOC must have an ongoing feud with the farmers in the area because here was another route, clearly deliberately obscured by the land owner in the hope no one will find it!

What an odd little place. We found this route on Sunday afternoon, declining to stay and come back in the morning, when weather forecasts looked better. What a contrast in the photos! Some looked better with the moody menacing Sunday cloud!

The track up is steep and difficult, only JUST negotiable by car. Had it not been dry, it wouldn’t have been possible. At the bottom of the track is Bendigo, the original town. Mining failed pretty quickly here and all that’s left is the remains of the bakery. It’s workings have been restored and moved to old Cromwell town.

Half way up the steep track is Logantown, one of two mining villages that were close together, supporting each other too. Only a few brick remains are left in Logantown and the chimney from the school still stands. 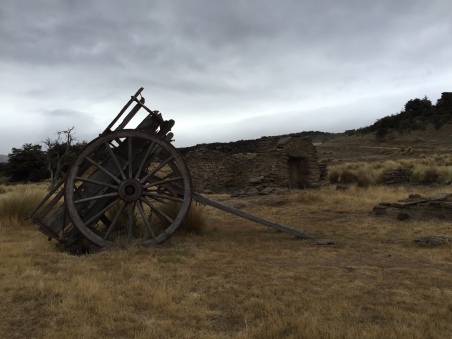 Further up at the top of the track was Welshtown. It stands prominently on the side of the mountain and it’s hard to believe that life was nothing but remote and bleak. From here, we came back the next day and set off on a mammoth 6 hour tramp that took in the valleys and Welshtown, where we found wee stone hut remains in all sorts of spots. All the creeks were bone dry, dusty ground and little grass on the exposed tops.

Here they mined the gold instead of sluicing it because the rock was hard rather than clay. That means the mountain side is riddled with mine shafts and it’s important to stick to the path. This time the rock was mined, then the rock was crushed by a battery to extract the gold. The piles of rocks here were much finer than in the sluicings. 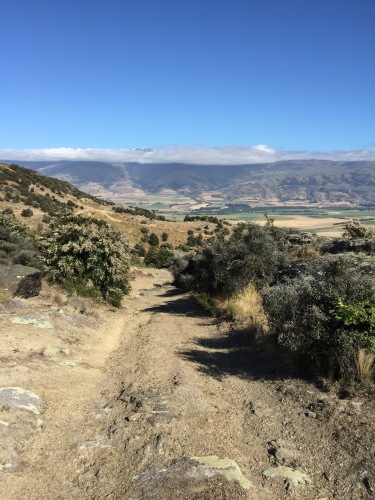 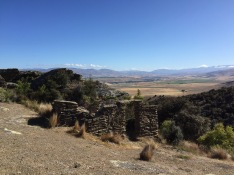 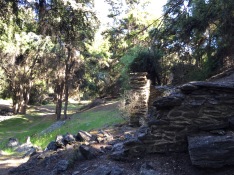 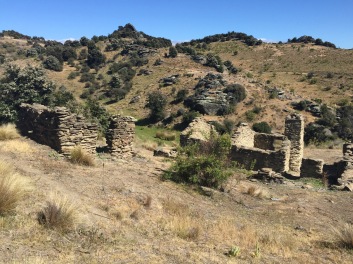 If you look at the first and last photo, you can see what a difference a day makes!

With some time and energy still to spare we headed off further into the mountains to take in this remote landscape and incredible views. Being untouched you can really get a sense of what it must have been like to live in a time before cars. They have made us a very lazy race!

We did part of the Bendigo Kanuka track that takes us further into the remote mountains. I don’t think all of this track is walked too often as we accidentally set off the opposite way round to the guide book, ending up in a steep assed dry river gorge where the ‘path’ disappeared beneath the bush growth! I think trampers usually cut the loop short and don’t do this part! More incredible views, ever changing landscape from dry dead grassy fields to mountains and deep valleys. We didn’t really have time for the whole loop, on top of all the walking we had already done so we cut it short just stopping at chinamans rock then returning on the loop back via a 4 wheel drive track short cut.

Quite simply, getting up to that vantage point was the most difficult thing I had to do all day but I was rewarded with simply breathtaking views of the valley. 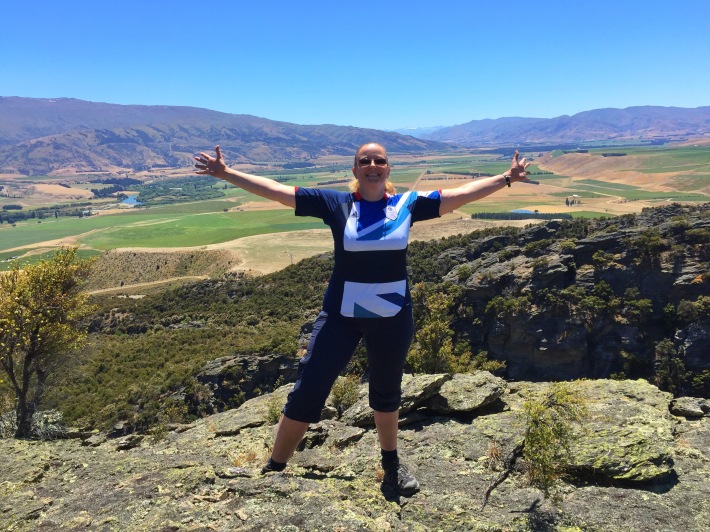 A challenging but rewarding tramp into some incredible and untouched landscapes.

The lady in the information office said Bendigo was better: I agree with her completely.