I felt like I needed a break from it all, lots of business related stress, overwork, still seeking an employee (which is proving to be hard work) so we decided to go a little further north an deplore a little bit more of this beautiful land.

We had no idea what Oamaru (western pronunciation ‘oh-ma-ru’ and traditional pronunciation ‘oh-a-ma-ru’) had in store, all it said online was ‘steam punk capital of NZ’ but to be fair, I didn’t know what that was either!

It was around a 6 hour drive north, around 2 hours north of Dunedin. Sounds mammoth, but those types of distances quickly become normal in New Zealand!

We stopped in Palmerston on the way through, in a converted old railway cafe that we have stopped at before. I love that what little history that New Zealand has is celebrated because with the magazines was a booklet telling all about the history of this wee town, how it fought to have its own identity when those with power wanted to call it Palmerston South (Palmerston North being on North Island) and it dates back to 1866.

Keen to reach our destination, we skipped past Shag point and the Moeraki Boulders, vowing to do these on our return trip.

The wee camp site we chose was a privately owned one 12km north of Oamaru situated on the mouth of the Waitaki river, popular for fishermen. I laid in bed at night and listened in total blackness to absolute silence. Beautiful.

Oamaru boasts a Victorian precinct as well as steam punk HQ. Naturally we were curious. A lot of things advertised here as Victorian are tongue in cheek Victorian, but Oamaru did a pretty darned good job of recreating the Victorian feel in a whole street filled with period shops. It really was like stepping back in time. 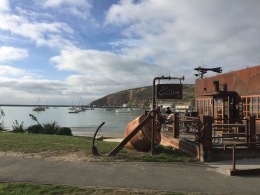 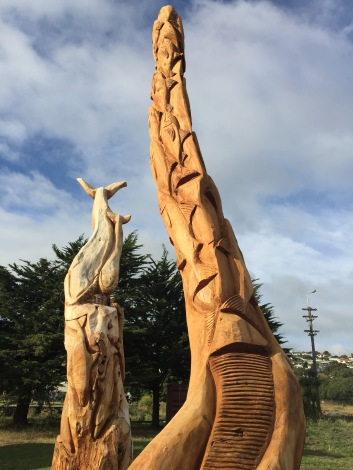 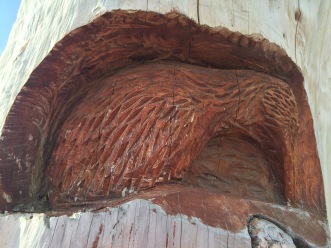 yes, the shop used this! 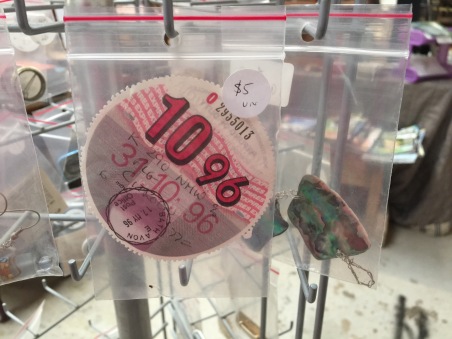 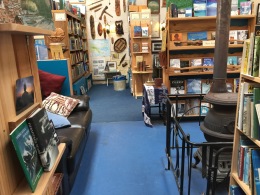 Such a beautiful place to spend a lazy day strolling around: old book shops (with sofas and a fire) second hand nick back shops that go back for miles, art galleries, coffee shops, bakeries and an ice cream parlour. It did amuse me when I found a British Tax disc on sale in a shop, stamped in Bath, Avon and dated 1996. I would have lived there as a student around about then! Think how much that tat we were forced to throw out before we moved could have been worth over here!

After a stroll around the farmers market (and a play on the park for Mark!) we finally discovered Oamaru’s waterfront. It’s a weird we place, like a cross between American and old colonial English, a seaside town without the seaside! Most of Oamaru’s waterfront is taken up with Kiwirail: a small harbour (which closed in 1986) and old harbour wall remains at one end of the bay. 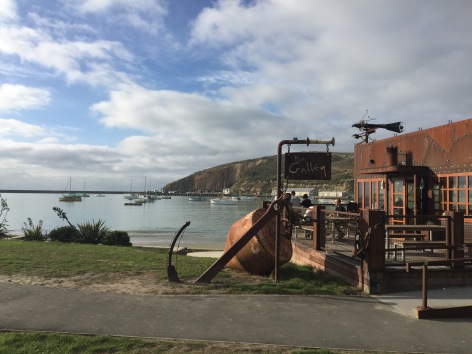 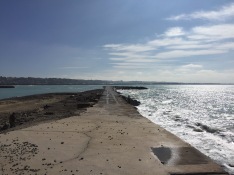 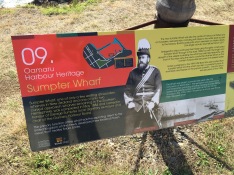 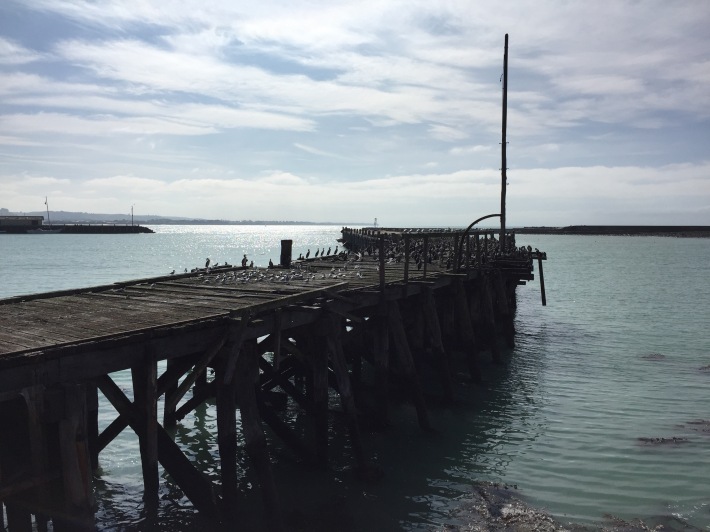 More cafes and a blue penguin colony occupy the sea front here and if you want to be a kiwi, you can take a 1km train ride to the edge of the harbour wall for $4. Well, I guess not many South Islanders will have been on a passenger train, since there aren’t any here! Lazy lot! Haha! Naturally, we walked!

We couldn’t visit the centre without a visit to the Steam Punk HQ. what a thoroughly weird place that was! 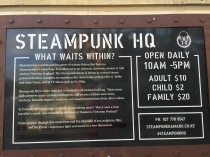 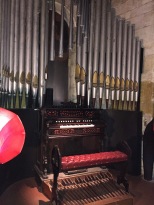 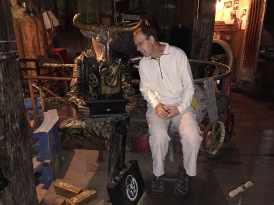 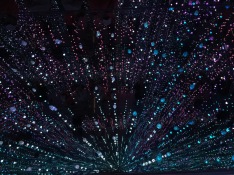 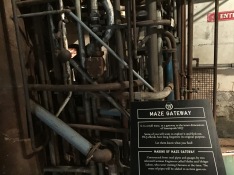 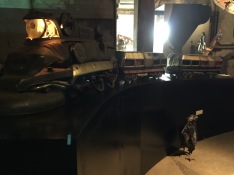 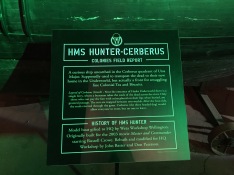 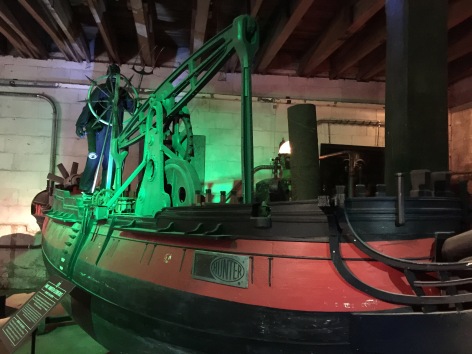 A short drive onto one of the surrounding hills gives you an amazing view of the whole bay. It also reveals some more of the scenic mysteries that are poorly sign posted!

We parked up by what we assumed was a walk. It said 25 mins to see a gun settlement. We expected it to look a bit like the one at Bluff, but it was a nice day so decided to go for a walk. A little more undulating then I originally thought (oops should have taken poles!) we arrived at the old gun settlement. Mark began describing what all the buildings were to me (no signs here!) then spotted the roof of a small building below. While trying to work out how to get to it (he’s inquisitive like that!) we spotted a sign just down the path that told us it went to second beach. From the gun turret this was totally obscured so I imagine a lot of people miss this and turn back here. We set off to investigate. We were not disappointed. We came upon two completely secluded beaches with steep paths down onto them, encased with some incredible rock formations. This is the thing with this country, signs aren’t alway present so unless you are nosy you might just miss a hidden gem! 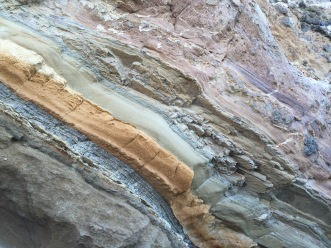 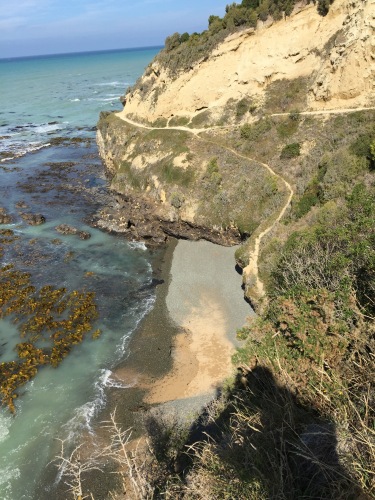 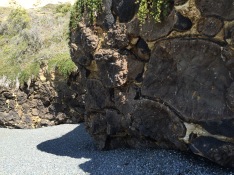 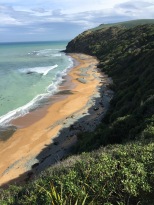 Well, who’d have thought we would find all that when we set off to look for gun turrets!

On our way back to camp, we spotted a curious Maori sport being played in a local park. It looked a bit like volleyball, but with 2 tennis ball sized balls and no net, a lot more players and a load of extra confusing rules. Anyone know what it is?

Our road trip back took us via the Moeraki boulders, where I have never seen so many tourists all in one spot on South Island before! So many Asians too with their flipping selfie sticks making people-less photos a real challenge! 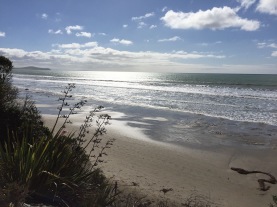 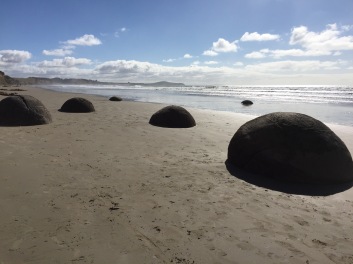 These boulders are mud rock formed around 65 million years ago and would have been in the surrounding cliffs, eroded onto the beach by the sea. They are the only ones of their kind in NZ.

Further down the coast is Shag Point. Windy like Slope Point, but a little more scenic. Either seals are excellent climbers or the tidal range is vast here! Once again, in our usual ‘where does this road lead’ type of style, we set the trend for the tourists here too by driving further up the road to another short walk and viewing platform. It was here we decided to have a picnic lunch. Well why not I say, lunch with a view! 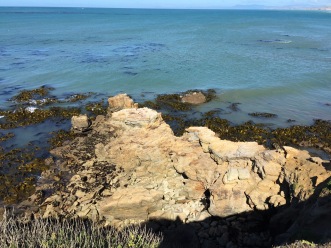 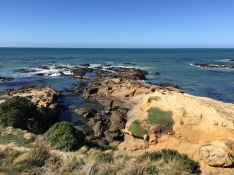 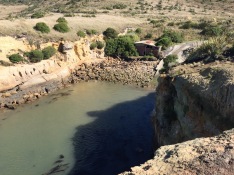 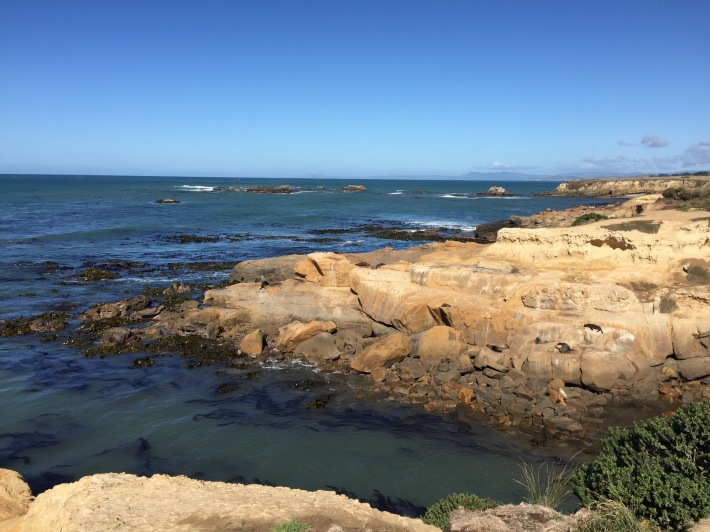 The rest of our route home was pretty uneventful. Except one more impromptu stop.

This sits by the road between Milton and Dunedin and we have driven past it loads of times but I have always been curious what the big deal was about. So we stopped and went inside! 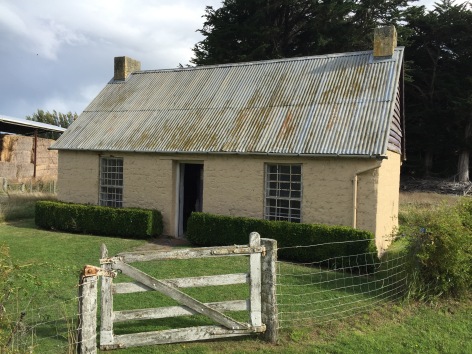